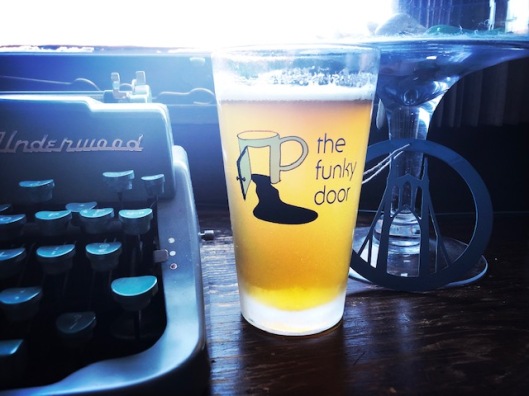 Chipped my tooth on an engagement ring
That’s bad luck (bad luck)
Could have stopped any one of these things
But that would have been bad luck.
– Neko Case, “Bad Luck”

I grabbed a glass out of the freezer to enjoy an early evening beer after a lazy day of chores as my daughter dressed as a mermaid and put on play makeup and took fake selfies with her three foot tall princess dolls using her toy phone.

It hit me at the same time that I noticed my own fingerprint in the frost on the glass: I turned in the keys to the space that used to my cafe ten years ago yesterday. Ten years.

I thought of that me I was ten years ago today: I had no idea what was next. No idea.

I planned on staying in Portland.  No doubt about it.

I started this blog. I had time and energy. To get back to writing. To figure out what I really wanted out of life now. I could maybe work part-time after all those years of six and seven day work weeks of 50-80 hours.

I knew, though, that Portland would be home. I felt sure that the relationship and house I was in would stay static.

Exactly one year after handing over the cafe key, I handed my house key over to the woman who had been my love for thirteen years and, with a ruptured ear drum and a lump in my throat, loaded my tiny Prius to the brim with plants and boxes and two chihuahuas and prepared to move back to California.

My mother was mad and missing. There had been a murder in my childhood home and it would, soon, be my job to do the first, tough weeks of the post-investigation clean-up of  that house. My sister was about to get out of rehab for the second time. I was trying desperately not to love a married man and I was with someone else whose house I would use as my refuge for the last few days in Oregon before driving through the border mountains with the split in my ear making crackling sounds that seemed like alien transmissions on an old radio broadcast

But ten years ago today, I didn’t know any of that. None of it. Not an inkling of what was about to start to happen. Where all of that would lead.

Today, I took a break from chores to read an article on healing from emotional abuse. Abuse. A word I am having trouble typing (or saying) but know is absolutely the right word (even typing it here is making my eyes well up with water).

It was the kind of article with a numbered list of things to do. Those lists we long for when we are feeling things we don’t want to feel – those lists that are so seductive and easy to swallow and give us anchors when the uncertainty of what’s to come rushes over us like a riptide.

I was just sitting on my bed reading it, really just trying to find a good book to read on the process of healing after a separation from that kind of relationship, just taking it in with composure and an analytical approach. Until the last numbered task: forgive yourself.

Deep breath in and then the tears came before I could even start the long exhale that was supposed to help keep the tears from coming. I wept. From a deep place inside that I have to keep at bay during most hours of the day. I wept for only a few minutes. My daughter was awake and I stopped reading and got back to doing.

Ten years I could have never predicted. That girl giving her doll a fake bottle of apple juice in that other room the biggest and most unexpected surprise to the self I was on February 2nd, 2010.

What I gave up to have her the biggest and most unexpected shock, still, to the self I am today.

Like ten years ago, though, there is so much uncertainty. So very much swimming through each day working to stay true and strong without knowing where I will end up even one day later. Where I will find the strength and wisdom to help her through this new reality.

But so much I do know.  The calm of my bedroom (the room most rife with tension and fear in the last four years before the final end) a constant, vivid reminder of what I know to be true and right. A nightly reminder that there really is nothing to miss in that life I believed in that didn’t ever actually exist.

I go into the living room and help my daughter take a real ‘selfie’ with her dolls and I start to pick up some of the chaos of this lazy Sunday and she kneels down to playfully slip me a fabric rose under a door as she hides her mermaid tail and giggles quietly.

I get to more doing, that moving prayer of those of us sitting with discomfort and trying to trust in time and intention to help us through. As Neko Case sings in the background.  As my daughter and I dance across the room. As the calm of my home, as it now exists, soothes us both into daydreams and worlds of magic and make-believe. As the late afternoon sun streams through the large west-facing window in the living room.

That list will have to wait. I’m not there yet. I want to be but we all know that want doesn’t give a shit about us. It comes when it comes. When it’s time.

I will be there someday. I know it.

Like I knew, ten years ago, that taking that leap, jumping without knowing what came next, would lead me to something I couldn’t imagine living without. Like I knew, without knowing, that life would change in unimaginable ways just by making the right, hard choices and staying strong and trusting in the process.

For now, I sing with Neko, wishing my voice was better than the one I have, and I help my daughter find the LOL doll she had minutes ago but now can’t find and I toast to all the things that will happen in the next ten years that I can’t possibly predict. Combing over Broken Cross I held onto you, haunted by the ghost of something new.